One of the frustrating things about living in upstate NY is the short training season...  Luckily it is typically cool enough in the summer to do training (not so in IN!), but once December hits the obstacle course is covered in snow.  I decided to fix that...I built an indoor obstacle course!

Actually, I built the indoor course because I had a few obstacles that I didn't want sitting out in the sun all year.  But I quickly realized that there are other benefits!

First up is several unusual surfaces to walk over.  From left to right: a leftover piece of foam insulation, a trash bag, part of a shower curtain, and some foam pool noodles. 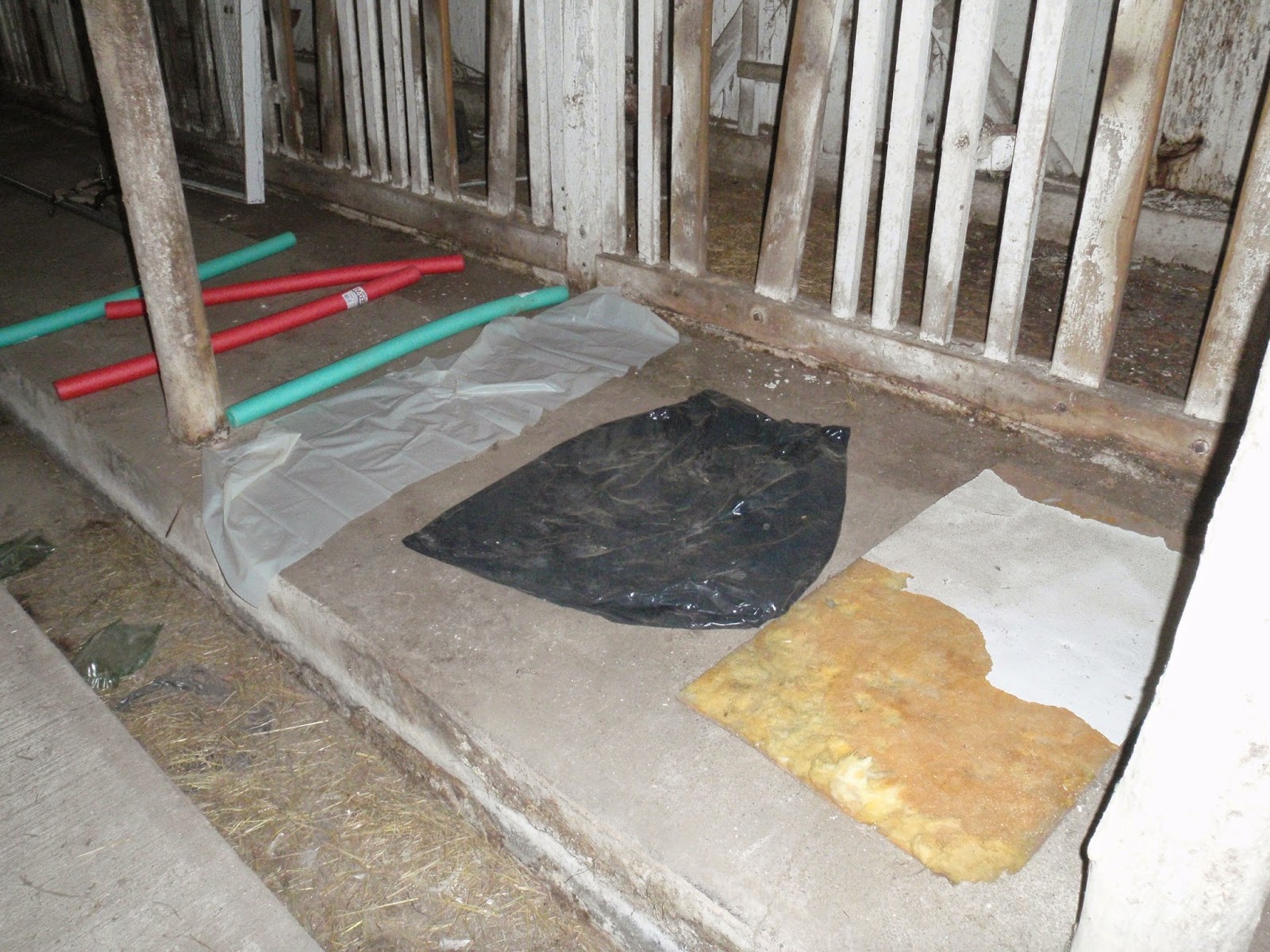 Next is a step over/jump.  It is actually a leftover roll of fence. 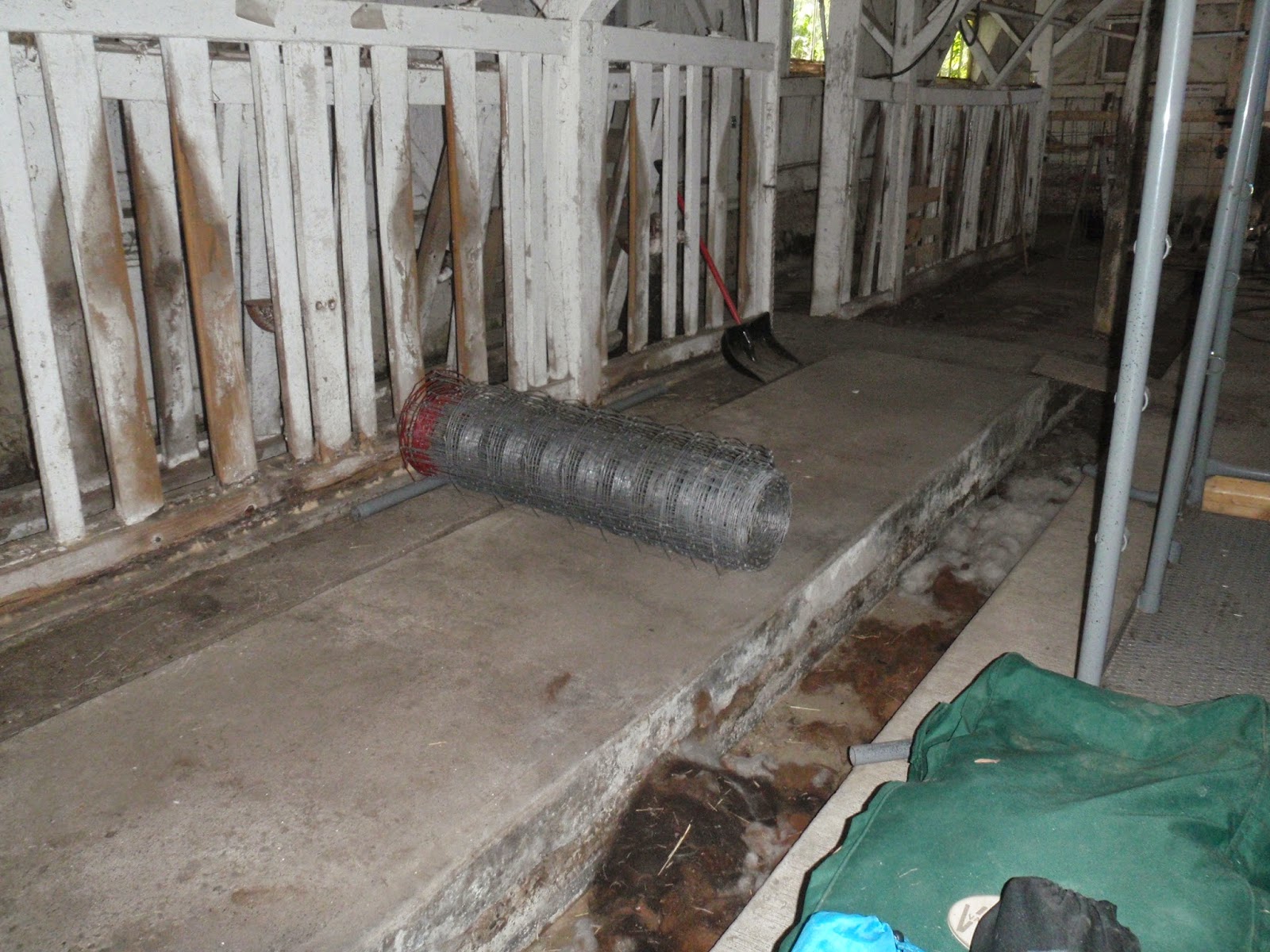 Last but not least is the tunnel.  After the NY State Fair, I knew I desperately needed a tunnel.  I haven't had one in several years, so even Ralph is unaccustomed to going through one.  Luckily there are lots of posts in our barn, so I wrapped some heavy twine between two posts and the wood cattle stanchions.  Next I draped a tarp over the top. 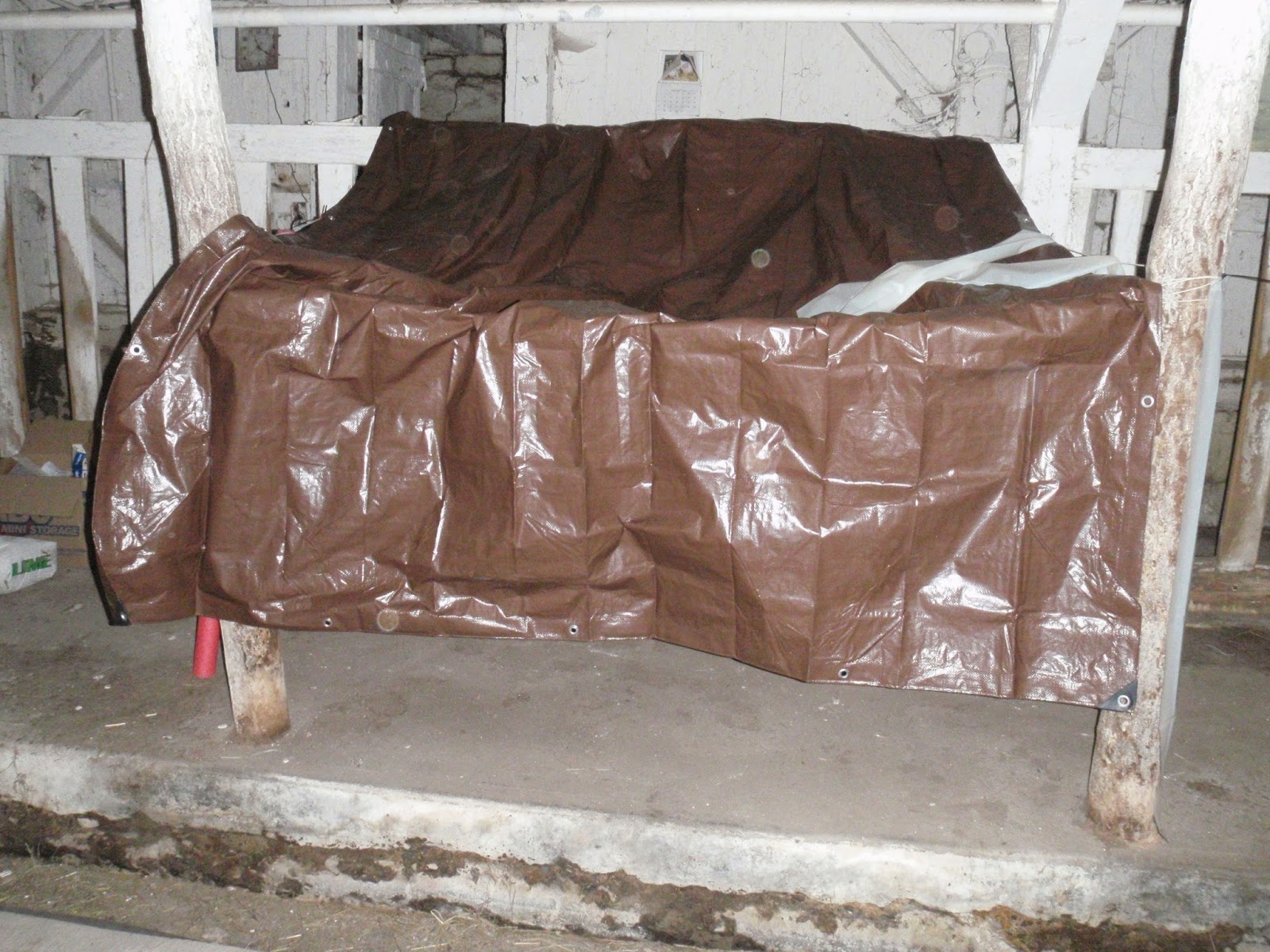 On one side I attached a shower curtain.  I had to cut the bottom off so it didn't drag the ground, and I slit the curtain in several places. 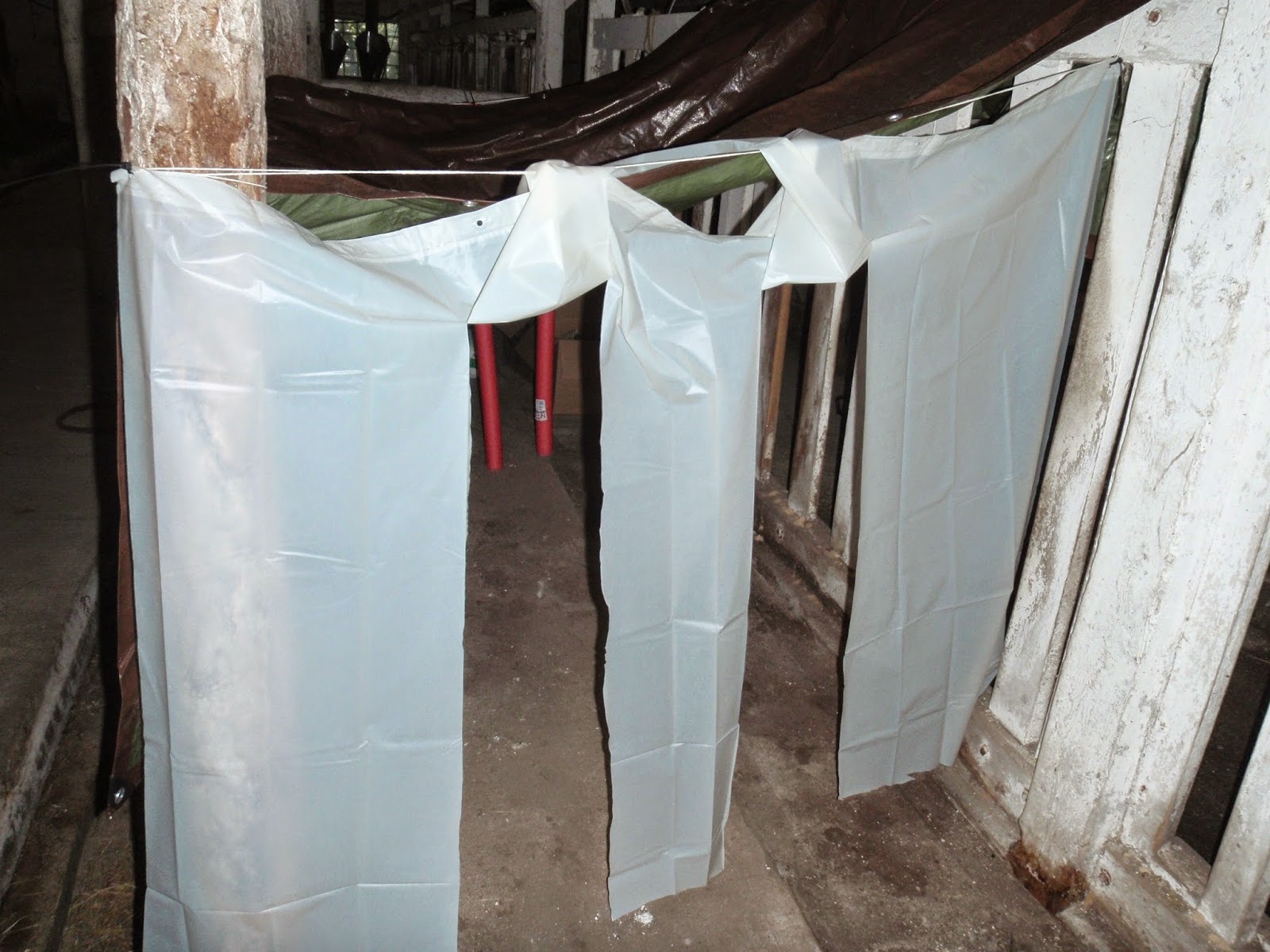 On the other side I attached a few foam pool noodles.  I need to get some bells to hang on one of the ends too. 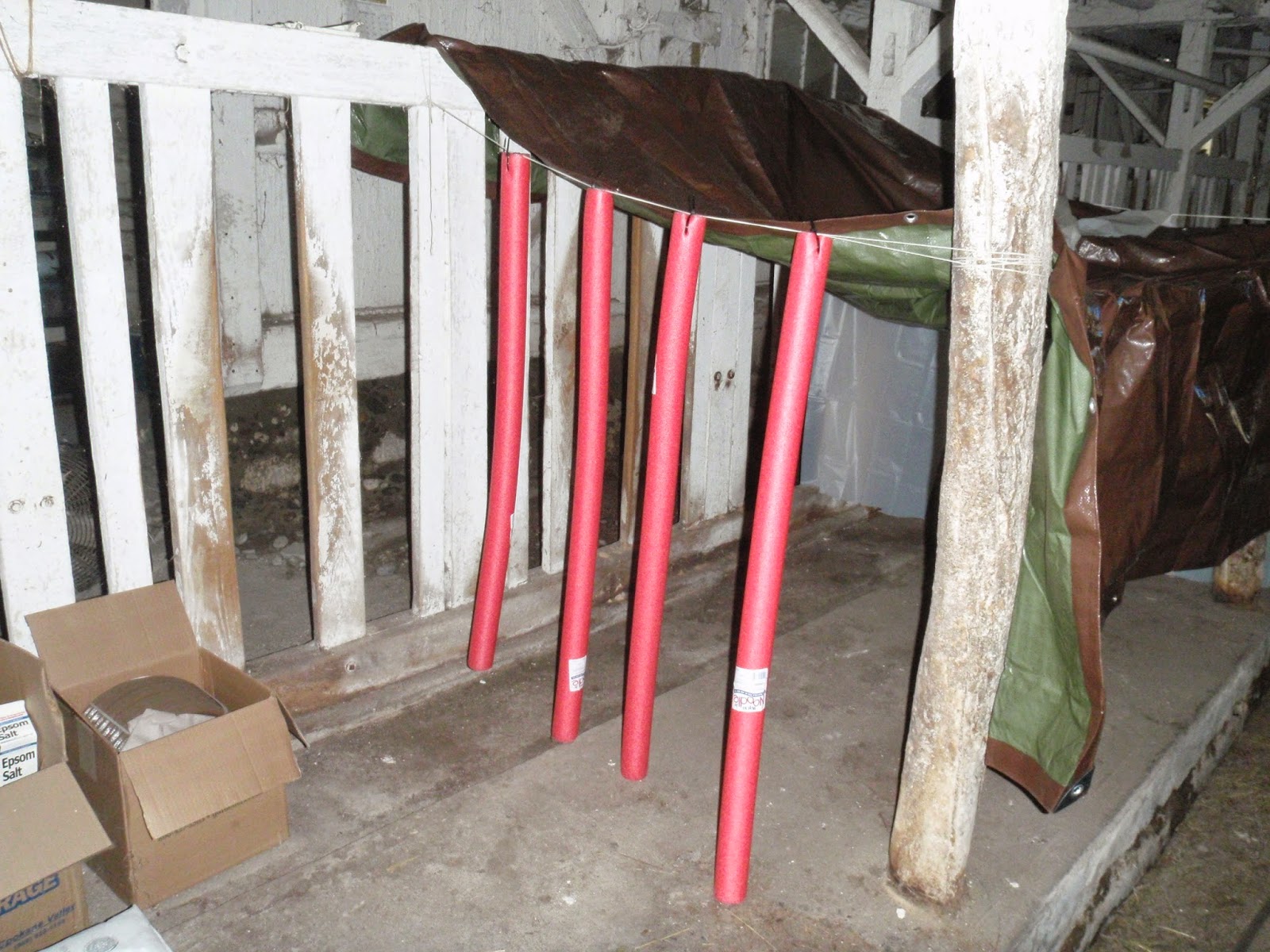 Just a day or two after I set up the indoor course I had all 3 lamas going through it.  Their reactions were quite surprising.  For some reason T absolutely refused to do any of it, at least the first time.  The second time (a couple days later) he was only nervous about the tunnel.  We still need to work on that.  Kara was amazing with the tunnel, her issue was the unusual surfaces.  But it only took 2 passes and she was over her fear.  Of course Ralph was awesome about everything!

From now until the next show (the Big E, the last weekend of September), my main focus is ground-driving T.  He has good moments and bad, I may end up scratching but I figure I might at least try!
Posted by Emaly at 8:49 PM