This week I'm being lazy and refusing to download new pictures from my camera, so I've decided to post another llama biography!  On a more current note, I will update that I have finished 2 more Christmas gifts (knitted items) and am working on an (optional) third!  Just one more to go, which after tomorrow may or may not be needed...

So on to Cattera...  Cattera was another of the three original llamas we purchased from Shagbark Ridge Llamas back in 1999.  She would be a companion for the first llama we purchased, Sheba.  When we bought her, Cattera was a beautiful 2-yr-old female, bred for her first cria (baby llama) (due in October 2000).  Like Duque, Cattera had been shown extensively by someone in Shagbark Ridge's 4-H program, and overall she was a friendly girl.  However, Cattera hated *me* with a passion!  No matter how nice I was, she just loved to spit on me!  Cattera quickly became another one of my sister's favorites, and Hannah also showed most of her crias.  I just stayed away!


I will give Cattera one bit of credit, she was a wonderful breeding female for our herd.  She had 7 crias on our farm, and 1 more after she was sold.  She was always a perfect mom, and gave us gorgeous crias.  Cattera's first cria was Cattessa, one of Hannah's best show llamas. 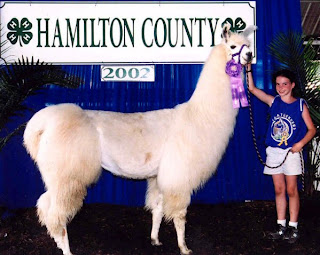 Next came Catanna.  She is easily the largest llama we've ever had born on our farm (34 lbs at birth) and matured to be the biggest too!  She was a bit stubborn to be good for performance, but she had beautiful babies. 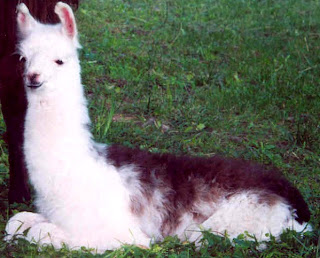 Next was Catalina (are you sensing a trend in the names?  Every single Cattera baby had a name that started with *Cat*).  This little girl had a lot of potential, but unfortunately she didn't get shown much and didn't get to live up to it. 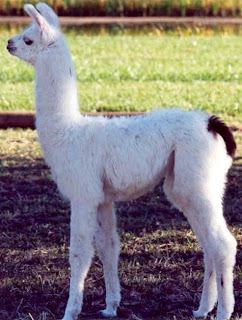 The first boy was Catlinite.  Amazingly he and Catalina (above) are NOT full siblings, they have different sires!  But they really do look identical!  Catlinite was my show boy for awhile, and actually did pretty well. 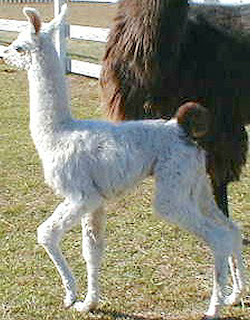 Next was the pride and joy of the farm, Catastrophie.  After all these white llamas we finally got some major color from Cattera!  Looking back at her progeny now, I believe Cattera produced crias with the coloration that the sire threw, and we were just unfortunate enough early on to breed her with males who threw white.  Taz was another of Hannah's show llamas for a little while, and then became one of our breeding females for a few years. 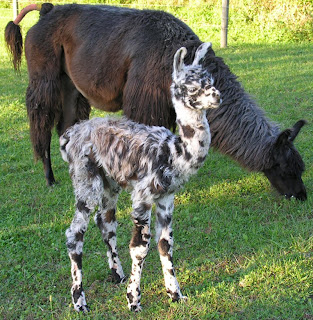 Once we finally got color, we really got color!  Cataleya is almost a carbon copy of her sire.  She was my show girl for a season, and did really well in walking fiber! 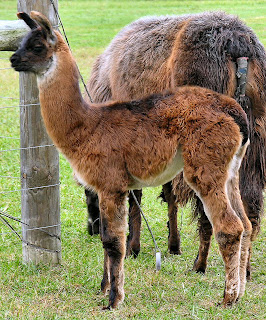 Another color mystery for you...Catallegre (below) is a FULL sibling to Catastrophie (above)!  We were obviously hoping for another reverse appy girl, but got this little tux boy instead.  He may be the most correct of Cattera's crias...he was a lot of fun to show for the few months that we had him.

After Catallegre was born, we decided Cattera needed a break from being a mom.  Instead, she got to be a grandma!  Here she is with Catastrophie's first cria, who looked remarkably like her! 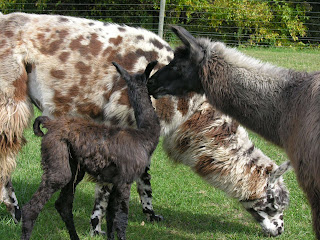 This is Cattera at the ripe old age of 12, the summer before she left to go to her new home in Florida. 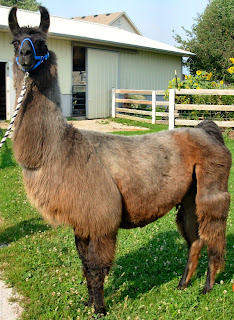 And the very last Cattera cria, Coosada Moon.  He also is a carbon copy of his sire, and was born at Cattera's new home in Florida.  I for one was not really sad to see her go, but it was still good to know that she would have such a great home! 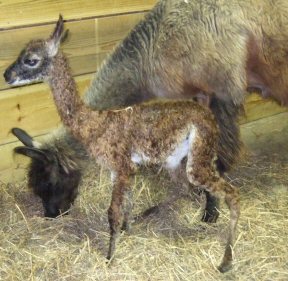 Well I can't seem to come up with anything specific to write about, but I'm procrastinating on doing homework, so I thought I'd write up another llama biography.  I have over 30 llamas to work through, and I've only done one so far!

The second llama we added to our herd back in November 1999 (yes, we've had llamas over 12 years now!) was SHAG El Duque (we call him Duque).  He's also the only llama left on our farm from the original four we started with 12 years ago.  Duque started out as my younger sister Hannah's show llama.  He came already trained, so he was perfect for an 8-yr-old to show for the first time.  Hannah really has a way with animals, and she and Duque "clicked" like you would not believe.  Soon they were winning Championship after Championship in both halter and youth performance.  Here they are at the regional show- Duque won Reserve Grand Champion in Non-Breeder Halter. 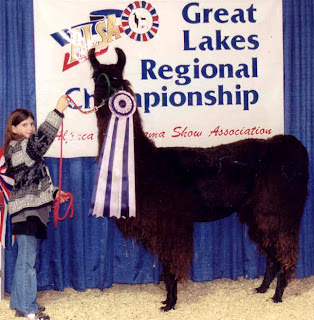 Duque was also our #1 public relations llama.  He is not phased in the least by people, and really seems to enjoy the attention.  Hannah used to ride him all the time, and we even let our younger cousins take a turn when they were small. 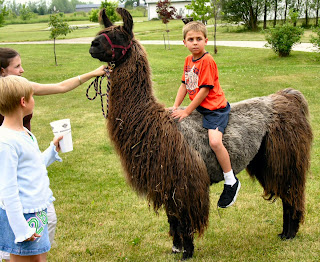 One of the last years Hannah showed Duque our family made the long trip to Lincoln, Nebraska for the ALSA Grand National show.  Duque showed in halter and youth performance with Hannah.  This picture was taken at the national show- wouldn't it make a great ad? 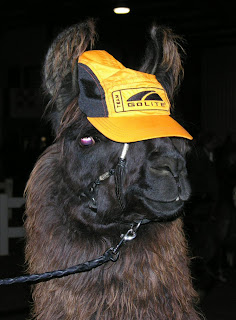 In his younger years Duque was also a great hiking companion.  Due to his superb performance training he didn't mind wearing the pack (or anything else- I showed him on costume one year) and would follow anyone anywhere!  This is Duque with Hannah (right) and her best friend Anna (left). 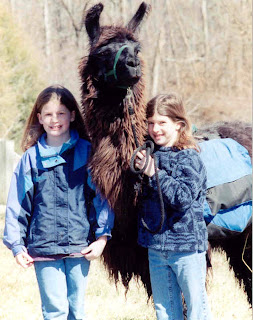 If you're into llama genealogy, Duque is the son of the famous LW El Cid.  Cid came from Llama Woods farm in Oregon, and was the main herdsire for Shagbark Ridge Llamas (where we bought Duque and several other llamas) for several years. 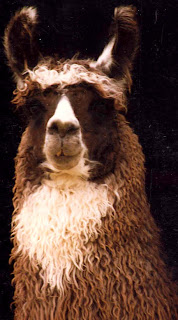 This is a baby Duque with his mom, Mariette.  She was a beautiful big girl! 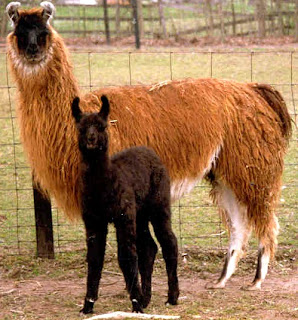 Low pasterns forced Duque into retirement prematurely.  He is still a farm favorite, and is living out his days with "his" girls.  He spent a few years playing alpaca guard- protecting the little male alpacas from our big herdsire Ridge.  He is still best friends with our one remaining alpaca, Ralph (left).