Finally time for the giveaway!

We finally reached 150 "likes" on the Autumn Hill Llamas Facebook page, so its time for the giveaway!

The winner for this giveaway is...  Barb Troje! 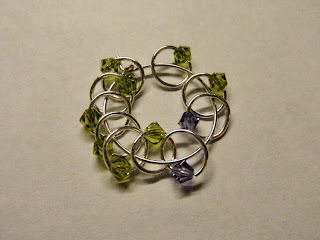 Barb, if you'd like to claim your prize, please message me through the page on Facebook with your address, and I'll get your stitch markers sent out tomorrow!

I'm going to have a bigger giveaway once we hit 200 "likes"...I'll be giving away either a small skein of handspun yarn, or a hand knit phone/camera cozy!  Please share the page with your friends so you can all be entered to win the next time around!
Posted by Emaly at 6:11 PM No comments:

Since the weather has been warming up the past few weeks, we've slowly but surely been starting farm work.  There's a lot to be done, and we've barely made a dent, but at least we've started!

First and fore-most, I spent a gorgeous sunny afternoon clearing burrs from the field where the llamas are going to go.  There's still a big patch of sticker bushes that needs to be cleared though.

A few days later we tackled the old barbed wire fence that ran through the middle of the field.  The fence had to be several decades old...most of it was buried under sod, and the posts were rotten.  Unfortunately, under all the fence we found 2 old metal rollers, plus about 6 railroad ties or telephone poles.  Once we fix the tractor we'll drag all that out of the way.

The next thing we did was to take out all the window frames that had broken glass.  I got replacement plexiglass from Lowes last week, and once things warm up again I'm going to replace the glass.  The windows are all sanded, but I want to re-paint them, and then replace the glass.  Then they'll be re-installed in the barn, and I'm adding hinges to 3-4 of the windows so that they can open.

And of course there is still a ton of stuff that needs to be done...  The next big project I want to complete (if we can do it without the assistance of the tractor) is to take out the manure mover thing beside the barn.  Most of the structure itself is wood, so it shouldn't be too hard to take out.  Unfortunately, there is probably 400' of metal "chain" running through the barn (the part that actually moved the manure through the pit), so we may need the tractor for that.

In between doing farm work, I've been doing a lot of gardening.  Mostly weeding and prepping 2 new flower gardens.  When I go home in 2 weeks I'm going to bring back as many flowers as possible to fill in some of the gardens.  I'll try to get pictures of the gardens soon...
Posted by Emaly at 3:37 PM No comments:

I've been spending the past few weeks thinking about nothing but FIBER!  I just started working at a local fiber mill, and all I can think about is how I want to get my stuff processed this summer, and how I wish I had more animals/fiber!!  And on top of all that I attended a fiber marketing seminar put on by the Broome Co. Extension in Binghamton yesterday, which gave me even more ideas for things to do with my fiber.

So first, and update on what I have planned...  As I mentioned before, with my nicer stuff (Ralph, Bluff, and Duque's blankets), I'm going to have it blended with sheep's wool and then made into roving.  Ralph's is going to be blended with either white or black Cormo, and Bluff and Duque's fleeces are going to be blended with a gorgeous BFL fleece that I just bought.  Then I'll try to sell the roving, or spin some and sell the yarn.  I also have two nice alpaca fleeces I bought from my neighbor back in Indiana, and I'll probably have those blended together to make a fawn roving.

Next in the plans is some corespun yarn.  I'm going to use the longer seconds that I have (from Bluff and Ralph), and probably buy 2-3 lbs of alpaca seconds from someone to blend with mine.  I want to get the corespun yarn done in stripes, rather than blending the colors.  And then I'm going to talk my mom into weaving some bags to sell.

My newest idea is getting felted boot insoles made!  For this I'm going to use the really crappy stuff (the short seconds/thirds from Ralph, plus April's fiber, and maybe a fleece or 2 that I will buy), and it will get blended 50:50 with wool at the mill.  I'm also toying with the idea of making dryer balls with the leftovers, but I'll have to see if there is anything left over!

I'm really excited about this coming year...  I just signed up for the second half of the Hamilton, NY farmer's market (August-early November), and I may find a craft fair or two in the fall to do (if needed).

Now that I'm doing the farmer's market, I really need to re-think and re-vamp my display.  Luckily I found out that my parents have a pop-up canopy that I can use in case of rain (fall in NY...definitely going to rain at some point!), but I do need to buy a table.  But that's the easy part...figuring out how to display everything I have is going to be tough!  In the past, I didn't have as much yarn, and I didn't really like my display anyway.  I like using the folding drying rack to display rugs, so that will stay.  I also have a nice wood and metal wire folding display that I can put on the table, and I'm thinking about picking up a few wooden crates somewhere to put things in.  I need to work on getting my display more vertical...I tend to just put things on the table, and that won't work!  I'm also toying with the idea of making a wall of sorts out of wood lattice...cutting the lattice to about 2' wide by 4' tall, and then hinging the pieces together so that they will stay upright.  Then I could hang yarn, bags, or scarves along the top of the lattice, and it would fold up to be easy to transport and store.  But if I'm only hanging things along the top, I'm not sure if it wouldn't be easier to make some sort of stand with a dowel rod across the top, and not bothering with the lattice.  I'll have to keep thinking...

So, how do you display your craft fair items?  Any suggestions for me?

For the past several years, things have been up and down with my fiber business.  When I first started Etsy was very new, so I got a ton of sales.  Now the competition is fierce, and I'm looking for some ways to make my shop stand out!  I'd love to hear your suggestions!  I'll give out 20% discount coupons to anyone who comes up with a good tip, or will review my current shop and give suggestions!

So first, the past...  Again, Etsy sales started of good, but quickly dropped.  For some reason, I don't get a ton of repeat customers.  I've had fairly good luck with craft fairs, but I just moved so all of the past ones are now out of reach.


Now, the present...  Etsy sales are picking up a bit from 2012, but it is early.  I've built back up my inventory of woven rugs, and made a few llama/alpaca batts to sell (but none of that has sold yet).  I found a nearby yarn store that *might* be interested in selling my handspun...I'm visiting Friday, and hopefully something positive works out from that!  I've also been having a lot of luck with my new fiber CSA!  I'm already almost sold out of fiber for the 2013 shearing.  I have just started advertising my new custom handspun, handknit llamas, and there seems to be a lot of interest.  Hopefully after shearing season I'll get some orders!


And most importantly, some of my thoughts about things to do for the future.

I'm thinking about entering the world of bulky/artsy handspun yarns.  Unfortunately I have quite the stash of luxury fibers that want to be spun thin (I'm going to aim for fingering weight for most of those), but I'm thinking about investing in a few pounds of neutral wool roving, and a bit less of some dyed roving (in a few colors).  That way I can play around with bulky yarns, as well as art yarns.  I can also break out the drum carder and make some blends of my own (either just mixing the wool rovings, or adding in some silk/bamboo or llama/alpaca).  I should probably get a few colors of silk/bamboo too, as well as some thin thread/weaving yarn for plying.  I don't really want to get into dying, but I think with a few well-chosen natural and dyed colors of roving I could create some good blends on my own.  I probably won't bother trying to sell any more batts though...

I really need to either find a better (probably in person) venue for selling knit items, or give up trying to make/sell them all together.  They just aren't selling on Etsy, and I'm not sure where I can advertise to get more traffic.  Maybe I will look into some new craft fairs for the fall (nothing knit sells in summer!). The few I have done in the past seemed to work out pretty well.  I'm not a huge fan of craft fairs, but I suppose if I limited myself to one or two it wouldn't be too bad.


I already have plans to get more roving made from my llama/alpaca fleeces.  I didn't sell any of my fleeces last year, so I'm going to get 2 batches of roving made.  One batch will be Bluff/Duque, blended with a silver BFL fleece.  The other batch will be Ralph blended with a black Cormo fleece.  I'm planning on trying to sell the roving next year, but even if I don't I can spin it myself!  The sheep fleeces I'm going to buy are local (NY), so I will have a local, eco-friendly product to sell.  I had considered starting to make knit items (to sell) only out of my own (or other local) fibers, as a way to enter a different niche market, but I'll have to see what sorts of venues I can find for selling knit items in general.


I also need to work on advertising...  I am not a huge fan of social media, but I've tried to be active on Facebook in attempt to get traffic.  Not sure it is working though...  I'm going to try and be better about posting here on my blog too, but I need help figuring out how to draw more people in to actually read what I post!

I had a few other ideas about things to try, but now I think I'd rather focus on yarn.  I was thinking about making my own patterns for bulky weight knit items (hats, scarves, mittens, fingerless gloves, cowls, etc.) that I could make to order and sell on Etsy as custom items, but that's not really the direction I want to go anymore.  I think I'll be better off focusing on just knitting for myself (and for gifts), and getting more serious about spinning to sell.

So...my request for help...  If you'd like to take the time to review my current Etsy shop, or give suggestions about things I might try in the future, I would really appreciate the help!  I'll even tempt you with a coupon for 20% off anything in my Etsy store!  I'd really like 2013 to be a big year for me, but I'm going to need help, and the best tips come from customers!  Thanks in advance!
Posted by Emaly at 5:35 PM No comments: