It's hard to believe that summer is almost over...seems like the year is flying by!  Now that I'm out of school, the end of summer isn't such a letdown.  Now that I'm a "big girl", it means cooler weather, llama shows, and of course the beginning of *my* farmer's market season!  (I specify *my* farmer's market season, because the market has actually been running since May, but I only sign up for the second half, since I figure it would be hard to sell wool hats in 80* weather!) 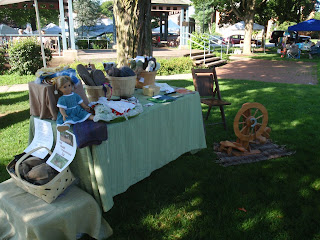 I've really begun to enjoy going to the farmer's market.  I wake up nice and early every Saturday, drive to Hamilton (a college town about 30 minutes north of where I live), set up, and then spin and talk to people (and hopefully sell a few things!) for 5-6 hours!  What fiber enthusiast could wish for much more?  Of course on the days when the weather is iffy it is a bit less fun, but the gorgeous fall days make up for it. 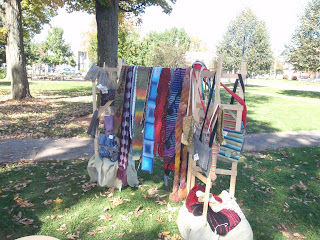 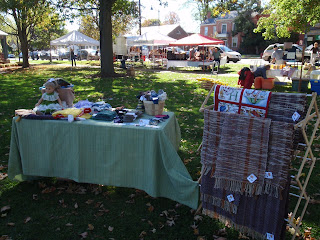 All winter my mom and I have slowly been building up my inventory of knit items to sell at the market.  I take other things like handspun yarn and insoles, but the knit accessories really steal the show.  I think I've got a great selection this year, and hopefully my future customers agree! 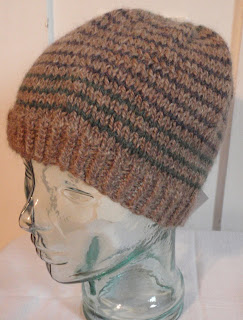 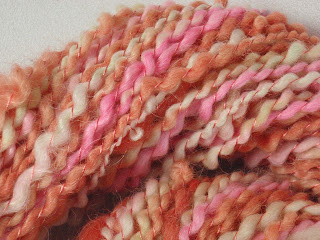 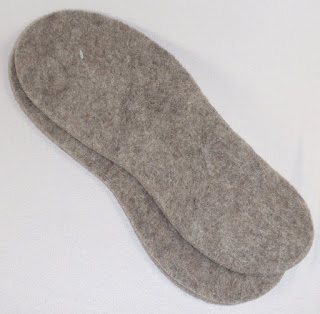 The market starts for me in just under 2 weeks...August 8!  Hopefully I'll have my new llama by then.  (Long story short, the original transporter changed her route so she couldn't pick up May.  I'm still searching for a new one, but I do have a promising lead!)  Can't wait! 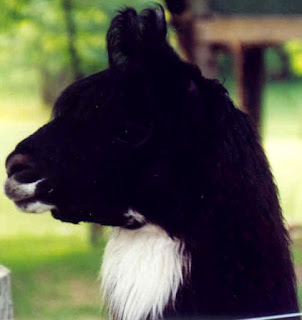 May is Coming Home!!!

I'm pretty surprised that I haven't posted about this sooner, because I've been over the moon for the last week or so...  After almost 10 years of being away, May (aka Little May Flowers) is coming back to the farm!


To make a long story short (but you can read the long version here), May was the very first cria to be born on our farm, over 15 years ago!  Her mom April (Alder Crest April Showers) has always been one of my favorite llamas, but I was stupid enough to sell all of her crias!  May was part of our breeding herd for a few years, giving us 3 gorgeous crias.  She was certainly one of the few select llamas that I've regretted selling over the years.

About a month ago I got an email from May's owner, asking if I'd be interested in taking her back.  Even with her age, I knew I had to have her!  I'd already been searching for a new guard llama, and May is one of the best.

Everything is now set for May's transport to NY...she should get here the last week of July.  She'll be quarantined for a few weeks as a precaution, and then has a busy fall scheduled!  She's going to be joining Ralph, Kara, and Lily at the NY State Fair at the end of August, and then will be visiting Dakota Ridge Farm in Albany for a "date" with one of their breeding males!  Even with her advanced age (and the fact that she hasn't had a cria in almost 8 years!) I'm hopeful that she can be bred one last time.  I'd love for April's legacy to live on in my herd!

Email ThisBlogThis!Share to TwitterShare to FacebookShare to Pinterest
Labels: llamas, May

It is really disappointing how little "free" time I have at home now that I'm working full time.  So much less time for the fun outdoor stuff like gardening, and even less time to blog about it!  But I finally managed to take some pictures of my expanded garden, and thought I would share them.

The garden is at least twice as big as it was last year.  It was supposed to be bigger, but 2 broken rototillers later my husband gave up and I settled for what was done.  The plants are the same as last year though, just more of most of them!

These are the "hills" of squash and pumpkin.  I'm trying out a few different trellising methods, we'll see which one wins in the end.  Still battling the dreaded cucumber beetle, just like last year! 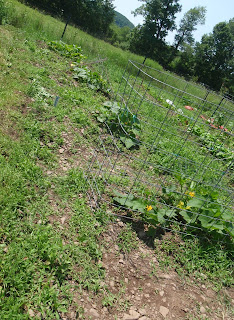 I finally got my permanent flower edges planted.  Hopefully I remember to mark them at the end of the growing season so that they don't get tilled under next year! 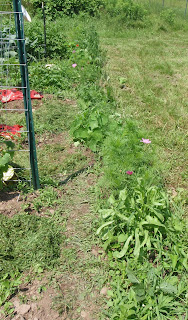 This is the second planting of spinach, onions, beets, carrots, radishes, and lettuce.  I have gotten a TON of radishes out of this wide row, and picked a good amount of lettuce and spinach today. 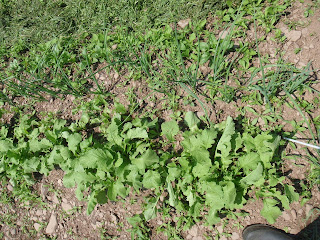 This is the row of cucumbers.  I hid them under a floating row cover for several weeks after planting, but they started to bloom so I freed them.  Darn cucumber beetles still found them! 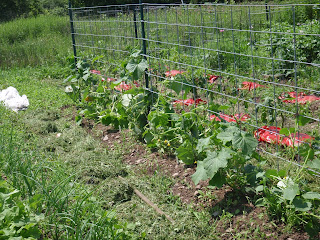 Can't forget the tomatoes!  I planted almost twice as many as last year (not by choice!), so I hope they do well.  I did get some fungicide to hopefully thwart the blight. 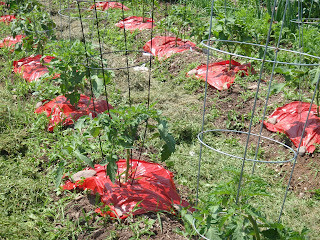 My first planting of onions, spinach, beets, carrots, radishes, and lettuce.  I've picked almost all of the spinach, lettuce, and radishes, and most of the beets.  I noticed today that something is eating the carrot tops, but hopefully they'll still live. 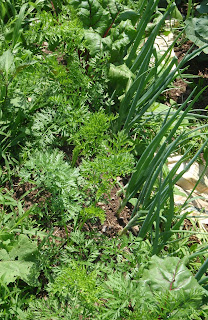 Good old broccoli, if only everything were this easy to grow!  I've already harvested 3 big heads so far this week. 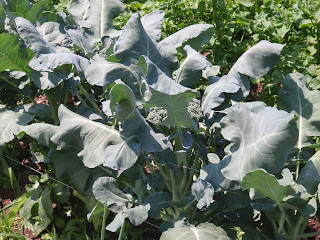 And last but not least, the potatoes.  I definitely planted the rows too close together, and I'm worried they aren't hilled enough.  But the plants look gorgeous! 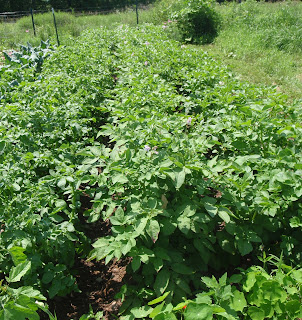