Well it has been a whole MONTH since the NY State Fair, and I'm just now posting pictures!  I'm a terrible blogger when I'm working full time...

Overall, the animals did pretty well.  They all placed respectably well in halter, and Ralph even managed a performance class placing!  Lily was not at all happy whenever Kara left the pen, but by the end she managed to refrain from trying to jump out!  They weren't very happy about all the people though, even Kara.  They spent a lot of time in the middle of the stalls, just out of reach.


As with most shows, there were highs and lows.

First off, it was just plain awesome being in the ring with May again.  She was the second llama that I showed as a kid, and it was so much fun to be back at it with her.  And she was amazing!  The judge loved her fiber (even though she was body shorn!) when we were in halter, and he seemed pretty impressed when I told him she was 15 years old!  She managed a respectable 4th place in light wool adult female, despite being the oldest in the class.  And even without any performance work in 13 years, she did amazing for me in obstacle and public relations.  She placed 20th out of 49 in novice obstacle, and if she hadn't refused a very steep and narrow stair obstacle in novice public relations she would have placed pretty well...she got an 8 or 9 (out of 10) on all the other obstacles!  I can't wait to see how she does next fall after some training! 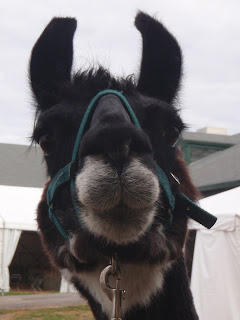 Ralph was his good old steady self.  Always nervous, but I've learned how to deal with it most of the time.  He placed 7th out of 49 in novice obstacle, and if I hadn't forgotten an obstacle (the easiest one too!) and gone "off course" he would've done well in novice pack.  I think he was 21st out of 48 or so in novice public relations.

Kara...well Kara was mostly my fault.  She got pretty heavy this summer on all our gorgeous green grass, and thus didn't do so hot in halter.  She placed 3rd, right behind the Grand and Reserve Champion winners.  She also placed 3rd in bred and owned female, behind the Grand Champion Heavy wool and Suri winners.  She was great in showmanship though, except for not letting the judge touch her.  We still got 2nd though, which I thought was pretty good.  And she got to meet her "little" half-sister, Sunny.  They placed 1st in produce of dam, and the judge loved them and their size!

And last but not least, Lily (aka MSF Regal Princess).  To be honest, Lily was my disappointment.  She was very very nervous being at the show, and it came out in the ring.  She was a mess in the performance classes, although she did try some new obstacles which I was proud of.  She wanted nothing to do with halter either, and thus didn't walk very well.  She got 2nd out of 3, behind the Grand Champion heavy wool female.  The judge seemed to like her, he just couldn't evaluate her movement very well.  I'm hoping that I can get her over some of her fears this winter, and get her to more shows this spring to help as well.

It was still a great show with lots of great people, and May got to go to home with Dakota Ridge Farm from Albany to be bred to their gorgeous male (and Best of Show at the NY State Fair!), Joey!  Very excited for this baby!!