I'm happy to announce that May has finally made it home!  It has been 8.5 years since I've seen her, and it is almost surreal that she is back with me.  And of course she is the inspiration for this post! 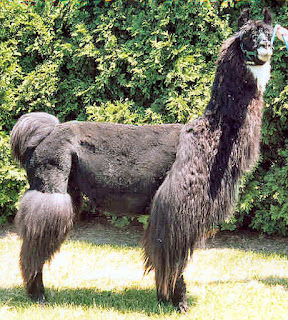 I'll admit, for the first several years that we had llamas (ok, almost the whole time we've had llamas), we were terrible about quarantining new arrivals!  We always had a small herd, and not a lot of extra space, so any newcomer or someone returning from a show went right in with the herd.  The thought of that makes me cringe now!  Luckily when I set up the new farm I made sure to set up a quarantine area.  Any time a new llama comes to the farm they will go in there for at least 3 weeks.  My show string also goes in the quarantine pen for 3 weeks after each show.  When we build a new barn I plan on building yet another quarantine pen so that I have a place to put females when they come for outside breedings.


For the past few years, it has seemed like parasites are on the rise.  I believe that is due to reporting bias...with the advent of online forums more people are discussing the issues they are having in their herds.  But the good news is that owners are becoming more proactive when it comes to preventing parasite issues on their farms.  And one of the easiest ways to do that is quarantine!

By quarantining a new llama (or one coming back from a show or other farm), you lessen the risk of spreading internal and external parasites to the rest of your herd.  Parasites are easily picked up at shows and other farms, and even during transport!  And of course the stress of being at the show/other farm/transport is enough to make an insignificant parasite load bloom into something dangerous!


Quarantining is pretty simple...pick a well-behaved companion from your herd (if you only have one newcomer) and stick them in a secluded pen for a specified period of time.

I like my quarantine pen to be relatively small.  I want it to be a dry lot (aka no grass) so that parasites are more easily contained.  And of course I don't want to risk contaminating a large pasture!  My main quarantine pen is about 40' x 50', with a 10' x 20' pen in the barn.  It is big enough for my entire herd (now a whopping 6 animals!) to live in during the winter/early spring.  April and May are in this area now.  The new quarantine pen I finished building today is much smaller, but still usable.  The outside area is about 15' x 30', with a 10' x 10' pen in the barn.  I probably wouldn't use it for more than 3 animals at a time (Kara and Ralph are in there now).


The length of time that you quarantine is a bit of a grey area.  For me, it comes down to how bad I perceive the risk to be.  If I suspected that the animal would come in with a huge parasite load, I might quarantine for a month or two (and run lots of fecals during that time).  If I had a healthy animal coming from a reputable farm, I might quarantine for just a few weeks.  I quarantined Lily for 3 weeks this past spring, and plan to do the same with May.

While the animal is in quarantine, it is important to monitor their progress.  It is a good idea to run an initial fecal (I wish I had done this with Lily), so that you have an idea of what you are working with. It takes parasites awhile to increase (if they picked something up from the transport or stress caused a bloom), so you should run another fecal in 1-3 weeks.  When you run the follow-up fecal, don't forget to test the companion animal as well...they could have picked something up from the newcomer.  If you need to treat for parasites, don't forget to run another fecal 10-14 days after treatment.  Yes this will prolong the quarantine period, but you need to make sure that the treatment worked (and not introduce resistant parasites to the rest of your herd!).


During quarantine, be sure to offer the best nutrition possible.  Nice leafy second cut hay is good, and I like to add electrolytes to their water.  You can add grain/pellets if they aren't overweight, just be sure to introduce them slowly (mixing with the feed they got at their previous farm is best).  And don't forget the minerals!  May has been snarfing them down today!  Something new that I tried with Lily was an immune booster herbal supplement.  Being a young, recently weaned cria, I wanted to help her immune system deal with the stress as much as I could.  I bought an herbal supplement from Smart Pak Equine online.  I also plan on using this supplement when we go to shows.  I think for May I'm going to offer specific herbs instead of the supplement, since she is older and can deal with the stress better.

Once the newcomer has been in quarantine for a few weeks, and has a clean fecal (and no external parasites), they are free to join the herd!  It is always fun to see how the rest of the herd reacts to a new animal!