Finally, it is time for the Indiana State Fair!  It is definitely one of my favorite shows of the year, and I can't wait to be back next Thursday.  This year they are having 2 completely separate shows (for the most part), so the llamas will be there for 3 full days instead of just 2.  I hope the animals don't get bored...it's going to be a long weekend.

All of my craft entries for the fair were submitted today.  Judging occurs this week so the items are ready for the fair to open on Friday.  I got all but 2 items that I was planning on submitting done in time, which isn't too bad.

Due to Bluff being bred (fingers crossed!) and April finally getting the retirement that she deserves, it is just going to be Annie and Ralph at the fair this year.  They both went last year, and Ralph did pretty well, getting 1st in halter, 5th in novice PR and 8th in novice pack (with 40+ entries in the novice classes!)!  Annie was really nervous at the show (pretty much all of the shows last year), so she didn't place, but she did respectable in performance as well.

So Annie is replacing April as my showmanship companion, and I'm ditching costume this year.  I'll come up with a new one next year when I can show Bluff (and the baby!)...I'm thinking a zoo keeper and elephants!

If you're in the Indianapolis area this weekend, come over to the fairgrounds and say hi!  We'll be in the draft horse barn most of the day Thursday (setting up), and then the show is all day Friday, Saturday, and Sunday!
Posted by Emaly at 11:10 PM No comments:

Well I was going to write about obstacles and performance training this week, but considering the massive heatwave that is hitting most of the country, I thought it might be better to write about how to help your animals beat the heat!  These tips are mainly focused on llamas and alpacas, but should work for other livestock and outdoor dogs/cats too!  I'll try to list my tips in order of importance.


I wasn't originally going to mention shearing, but now that I think about it shearing is very important.  But personally, every llama (except maybe classics if they are properly groomed) and alpaca needs to be shorn once a year no matter what.  At least the barrel/belly of the lama needs to be shorn.  For my breeding stock, I prefer to do a lion cut (goes about halfway down the back legs) or a full body cut (everything comes off!).  Once you know your animals you will start to tailor how to shear them every year.  I have an old girl who gets cold in the winter but tolerates the heat, so she just gets a barrel cut, even though she is very heavy wooled.  I have another female (light/medium wooled) who hates the heat, so she gets a full body cut every year no matter what.  Crias I will just start with a barrel cut until they are full grown, and all my adults get a barrel or lion cut every year, with a full body cut every 3 years or so.


Fresh, preferably cool, water is the most important thing that your animals need to get them through a hot day.  Granted, they should have it available every day, no matter what the temperature is.  It's a good habit to dump and rinse out water buckets daily, as animals won't normally drink dirty water!  In the summer, add some ice cubes (or frozen water bottles) to the buckets to keep the water cool, and locate them in a shady spot so they don't heat up as bad.  In the winter, warm water is greatly appreciated.  Electrolytes can also be added to the water- more on that later.


Being able to get out of the hot sun is key to your animals keeping cool in the summer.  Most livestock have access to barns or shelters of some sort usually, but if this is not possible at least give them some large trees to lay under.  Sometimes the trees are cooler than inside the barn!


In most parts of the country, fans are also a necessity during the summer.  In Indiana, our fans usually come on in April and don't go off until October!  It makes for a large electric bill, but it can be the difference between life and death for your animals.  You need at least one fan per animal, because the dominant ones won't let the others near their "spot"!  We put most of our fans about hip-high, but also have a couple angled downward from above.  20-24" hanging fans are ideal, but I know many people who use good old box fans in a pinch.  We also have a large (36") high-velocity fan that is amazing!


Now onto tips that are more optional, but still useful!  Hosing is one practice that my lamas could not live without during the summer.  They will literally line up outside the barn when they see us turn on the water!  The thing to remember is to only spray the bottom 50% of the animal (legs and the underside of the belly and chest).  The inside of the legs where the hair is short is a good place to hose, it is easier to get the water to the skin quickly.  And don't spray them superficially...try to soak them to the skin.  I've seen too many people "hose off" a llama in 30 seconds...it takes me at least 5 minutes to completely hose one of my animals.  Some animals don't like to be hosed, but most come around with time.


Over the years, I've himmed and hawed about giving electrolytes.  Sometimes the animals love them, other times they refused to drink them.  They are back to drinking them this summer though, which makes me happy.  I buy a horse electrolyte mix, but a lot of people use powdered Gatorade.  No matter what you use, just follow the directions about how much to mix with a bucket of water (and know how much water your buckets hold!).  Some mixes don't dissolve in water very easily, so shop around if you have that problem.  I realized a couple years ago the added benefit of giving electrolytes to my animals...it can help them drink "funny" water when they are at shows.  A friend of mine had a llama at the state fair who wouldn't drink the city water, so we added some of the electrolytes that I had brought (I had already added them to my llamas' water buckets), and he immediately started drinking.  Two tips regarding electrolytes: Since some animals don't like them, always offer an additional bucket (or more than one) of plain water so they can choose.  Most of the time on my farm the electrolyte bucket gets emptied much quicker than the other buckets though!  And be sure to clean out your electrolyte bucket frequently.  The added sugar makes the water a haven for bacteria, and the bucket can get nasty quick!


Wading pools are a more controversial topic.  I don't normally like the idea of leaving a wading pool out for most of the year, but when the temperatures get over 90, I don't really care if the animals will use it.  I have heard horror stories about crias drowning in wading pools though, so I don't recommend that you use them if you have young crias or dams about to deliver.  And keep the water fresh!  Prolonged use will rot the fiber too, so be wary if you are letting your show string have access.  My little alpaca Ralph loves water, so I tried giving him a wading pool for the past few years, but he never uses it!  It turns out that my youngest llama Annie has taken a shine to it though.  Supposedly she lays down in it (well, half-way, she's too big so she just puts her front legs and neck in)...I need to get my parents to take a picture!


The last tip is something that I've only heard about, never really tried myself.  Giving your animals access to concrete or damp sand to lay on can help them stay cool.  Unfortunately we have mats in our barn as the concrete is very slippery, so we haven't been able to try it, but I have heard many success stories.

Hopefully this helps give you some ideas on how to keep your animals cool this summer!  This past week has been way too hot...shows all around the midwest are being cancelled (mostly 4-H fairs), and animals are dying.  Be careful in the heat, and be cool!
Posted by Emaly at 3:32 PM No comments:

I'm slowly but surely making progress on my final state fair projects.  I'm definitely not going to get everything done, I think the lace project (a beaded vase) is going to have to wait for next year.

I think the knitted wire candle holder is done...I even have two to choose from.  I like knitting with the thinner (30 gauge) wire much better!  Now to make several more before the craft fair.  Which one do you think I should enter in the competition? 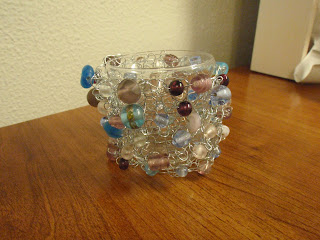 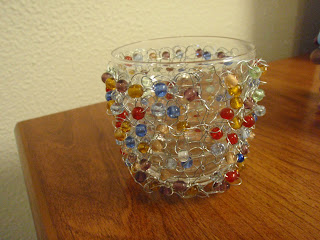 The felted wreath is totally done.  The leaves were a pain to cut out, but it looks really cool! 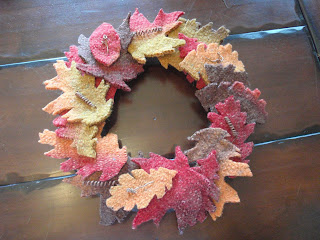 Now to finish a knitted flower for the felted bag, and knit up a pair of fingerless mittens really quick!  The coral wool is for the flower, and the blue wool/silk blend is for the mitts. 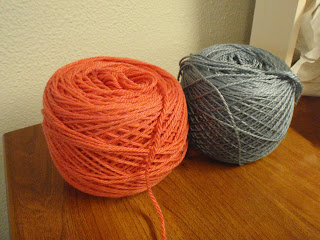 I also have to spin another partial skein to ply with the locks that I spun a few weeks ago.  I was going to ply it with the blue/green sea silk, but the colors didn't match so I ordered some purple bamboo to spin this weekend. 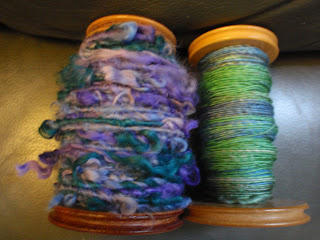 Happy spinning and knitting!
Posted by Emaly at 6:31 PM 2 comments:

It's that time of year again...when I frantically try to finish knitting and spinning projects to enter at the Indiana State Fair.  This year I'm trying to cut back a bit though, and not bite off more than I can chew.  Other than a few spinning projects that I have to start, everything else is just adding the finishing touches to some knitting projects.

I'm making pretty good progress this year though.  I have yet to finish a felted wreath (just needs to be felted, cut, and decorated) and a felted bag (needs to be felted and decorated), and still need to come up with a "Knitted Accessory" project.  Any ideas?  I have a few skeins left to spin too... a "Double Ply" skein (probably a blend of wool and tencel/silk) and a "Novelty" skein (Corriedale locks plied with tencel).

If you're in the Indianapolis area in August you should stop by the fair!  The livestock exhibitions are a lot of fun, and there are a lot of really nice finished products on display as well.  The llama show is August 4-7!
Posted by Emaly at 8:27 PM No comments: